Watch Wazza – Well, follow him anyway, on the Transpac race from Los Angeles to Hawaii. Go to the Transpac website and click on the ‘tracker’ button.

Watch this youtube video of Loe Real in action!

There are three berths & one head for seven crew members, so hotbed takes on a new meaning. The navigator/tactician has a bicycle seat to sit on, and I can’t see any form of a galley. So, Wazza, good luck and I hope you stuffed your pockets with masses of muesli bars for the voyage. 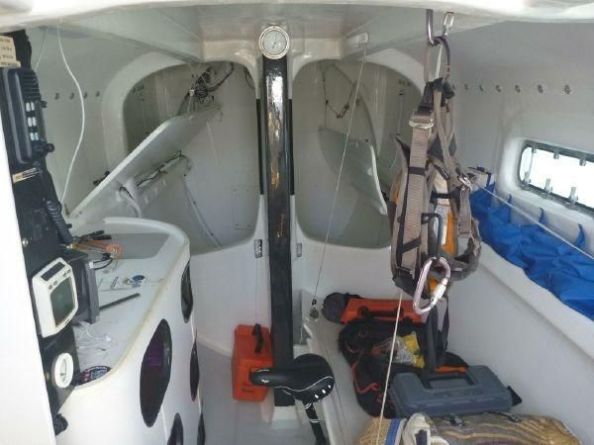 Turned out to be a grudge race between the blue cat & the green cat. Both cats loaded up with equally gorgeous crewmembers so started on a par. Green won with the shortest time, 1hr 49min, only 9 minutes behind was the Blue cat. Green also won on handicap, but that could be different next time. Blue cat crew became a little untidy after they crossed the finish line and headed for Roxy’s Bar. Of the rest, Ruby Soho came third almost an hour later but with all creature comforts intact. Volare pulled in with a commendable 4th followed by Centinela with Lakatoi about 3 1/2 hours later. Wee Welsh Dragon and Wild Spirit retired with various failures reported so missed out on the great Fitzroy Island hospitality.

No offence but, 10 crew may have been overdoing necessary ballast a bit. (They were good looking though)

Three starters for the trip down to Double Island and back, Volare, Impulse & Out of the Blue. Out of the Blue sped down the leads just managing to run a shy asymmetric spinnaker then shot down to Double Island surfing the waves only having to gybe once. Thinking the race was in the bag they cruised around Double Island to then be confronted by those waves on which they had joyously sped coming the other way, head on. Punching into the swell trashed the boat speed to 4 or 5kts meanwhile Impulse sliced through using her greater weight and length to advantage. After 5 hours and 48 minutes Impulse crossed the finish line five minutes ahead of Out of the Blue. Thanks to the handicap, Volare won the day only 23 minutes behind the leader. Impulse took out the 2nd place and Out of the Blue third.

Four entries in the Allied Bearings series for the Sam Cadman Trophy. Wild Spirit took out line honours and first place on handicap followed by Impulse. Volare was third and Centinela fourth.

The final outcome in the Allied Bearings & Tools series for the Sam Cadman Trophy went to the boats with the lowest scores, Volare topped the table with 8, Impulse was second with 18 and Centinela 3rd with 23. There were 14 boats in this series so if one didn’t race they got 14 points, only Volare finished three races. This shows that, if you complete a series, you have the best chance of a place on the podium. 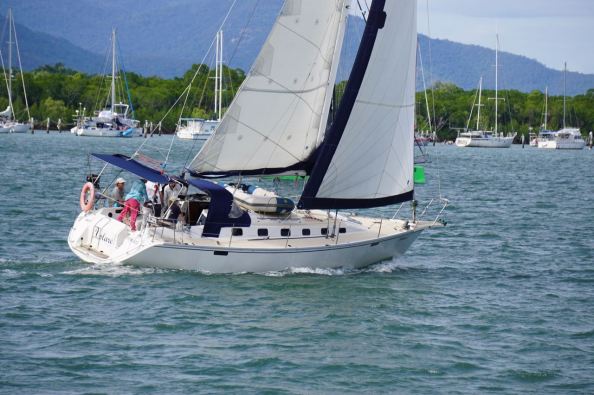 Saturday & Sunday 8th & 9th – CYC Anniversary Regatta. A good number of nominations are already in so it looks like being a good weekend of sailing. On Saturday it’s down to Yorky’s Knob and back for the “Rob Leitner Memorial” race. After that, two races on Sunday, possibly a False Cape & Holloways race depending on the weather conditions. Late nominations will be accepted though it does make it difficult for the organisers when trying to sort out the catering etc.

Saturday & Sunday 15th & 16th – All boats are tied up for the “Great Ellis Beach Painting Bee”. Actually, this weekend will involve preparing the clubhouse for the painting. Trimming, washing, scrubbing, scraping and sanding is on the agenda in preparation for the painting on Cairns Show weekend. Let’s hope the tradition, of this being the last of the rain before the dry season, does not hold out.

Friday to Sunday 21st to 23rd – Ellis Beach painting weekend. Bring your worst gear as it’s sure to get samples of the new colour scheme attached. If you have any skills in this area and can spare some time, please contact Margie at the office, and she’ll pass on the info to Barry our caretaker & Kevin Spies our committee member, both of whom will be co-ordinating the work.

Saturday & Sunday 29th & 30th – Come and enjoy the fruits of our labours at our beautiful renewed Clubhouse at Ellis Beach. The drizzly weather has surely made way for the start of the dry season and the Ellis Beach Regatta will be a blast.

Neil would really like formally written nominations. Relying on verbal communication doesn’t work ‘cos it could be a joke or get forgotten.

Put your hand up!

We need volunteers to run social dinghy sailing on Saturdays when there’s no course on. Scott would like people to commit to one Sat/month or each 2nd month, so that we have sailing happening after people have done their course.

That way we keep new members coming into the club and keep them sailing.  Anyone interested in helping should call Scott on 0410 477 166 after 16th July for more details.

He wants the load shared instead of all falling on one person’s shoulders every week.

Please see link below for Courses and Sailing Instructions.  Refer to club noticeboard on the day to see what time the handicapper has allocated to your boat.

Hi team
Had a fruitful meeting at the Ports advisory board meeting this morning #157
Outlined the clubs activities and focused on the SWD program on how well that’s growing with the addition of Endeavour Foundation, ARC disabilities, now Blue Care wanting to become involved.

Pointed out we are always in need of volunteers and the need for more boats and equipment, this raised an incredible amount of positive interest among the group where questions along the lines of; “Are the dinghies specialised?” “What performance?” “The cost of new dinghy landed in Cairns?” etc. etc.
Sea Swift is very keen to go the next step along with Ports North whom, I noticed, were taking notes as I spoke.
Pointed out that Doug Gamble of Fitzroy Island has generously donated a dinghy, which now carries the signage to support his donation. (As seen on TV!)
In summary, I have been asked to present a fact sheet of costings on new boats and support equipment to submit to the Ports Advisory Chair to be distributed among the board members for consideration. There’s a lot of horsepower in that room all maritime related, was told before I left that looks very positive for the possibility of businesses wishing to get on board, fingers crossed.

Dredging has the green light starting September (?) for twelve weeks to remove one million cubic meters from the channel. 20meters wider closer to port, 10m wider out to C1 with one-meter depth increase.
Dredging at present is the standard maintenance schedule. The channel is 13km long as a matter of interest.  I asked about Charlie 18, they said the mud will be removed more to the western side of C18.

A few years ago Ports North on a Christmas cruise ran aground at C18 so don’t feel bad about being a mudskipper even the pros manage it! 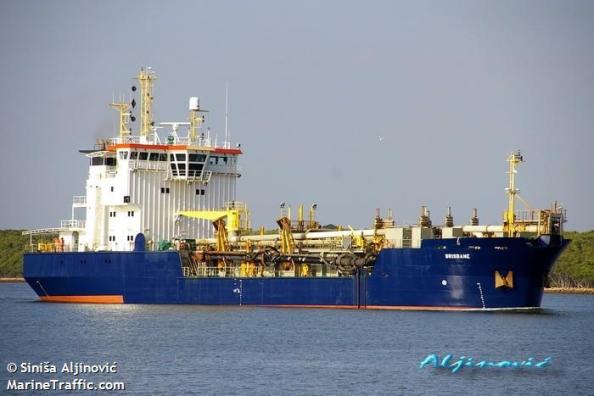 Visited Aussie marine after the Ports meeting, they have 3 boats of interest to me for the club safety boat. I’m gathering relevant info for consideration

Those wanting to purchase yachting apparel, sellI have made contact with a company based in Sydney sells online at boatcrewgear.com  0422953982, ANDREW is the contact, if you choose to buy something, include the code CAIRNSYC with the order for a 15% discount.
I tried and tested, all positive, had a pair of Musto sailing shorts within four days delivered home.

Spent the day renewing CPR, and senior first aid so if anyone is planning on a heart attack nows the time before I forget!

Since the last newsletter, we’ve been having a lot or fun at Sailability, and there have been a few positive developments.
Our paperwork for the incorporation of the association is now in the hands of the bureaucrats, and we’re eagerly awaiting confirmation of acceptance, which is when we’ll put a date on our first meeting as “Sailability Cairns Inc” to outline some goals and make some solid plans for the future.
We’ve had some really positive dealings with the media over the last month, with Channel 7 filming and screening a “Local Legends” segment, featuring Gordo for his fantastic effort in starting our Sailability program just over two and a half years ago and his tireless devotion ever since. It’s a wonderful piece of publicity for Sailability Cairns, which is already showing results and there’s also been strong interest in our activities from Channel 9, who sent down a team last Tuesday to film and report on our Endeavour Foundation session. They were really excited about everything they saw and got some great footage off and on the water. Jason East took Cassandra, the reporter, for her first ever sail, which she loved, while she talked to the camera as she was being filmed from the support boat. She also interviewed Jason, one of our keenest sailors with a disability, who comes down pretty much every Tuesday as a volunteer skipper to take people from the Endeavour Foundation and ARC Disability services sailing. It should all make for a great segment, and they told us that they’ll screen it a few times. I’ll let you know on the Sailability and CYC Facebook pages, when it’ll be on. If you haven’t seen it yet, scroll back a bit on the Sailability FB page to see the Channel 7 report.
Also, last Tuesday, we had representatives from Blue Care come down to check it all out and discuss bringing down a group on a regular basis, which would mean starting at 12.00 at least every 2nd Thursday, as well as every Tuesday.
As you can see from Poolies report, he had a very positive meeting with the Cairns Port Advisory Group, which is a very powerful and influential group of people representing more than 50 businesses and entities involved in the Port of Cairns. It’s wonderful that they were all so interested in what John had to tell them about our Sailability group and John and I are in the process of preparing a submission to let them know how they may be able to help us out.
So, it’s been a busy month, and it looks like it’ll be busier still, which is great because the busier we are, the more people with disabilities are experiencing the joy of sailing and the feelings of freedom it provides like nothing else can. All it takes is volunteers to make it happen, so if you’d like to join the fun, please call me (Andy) on 0435 013 709 or Aaron on 0495 581495. Alternatively, just call down to the boatshed on a Tuesday or Thursday afternoon, even if you’ve only got time to help us pack up and hose the boats and then enjoy a coldie with us when we’ve finished. Not a bad way to finish the day, eh? 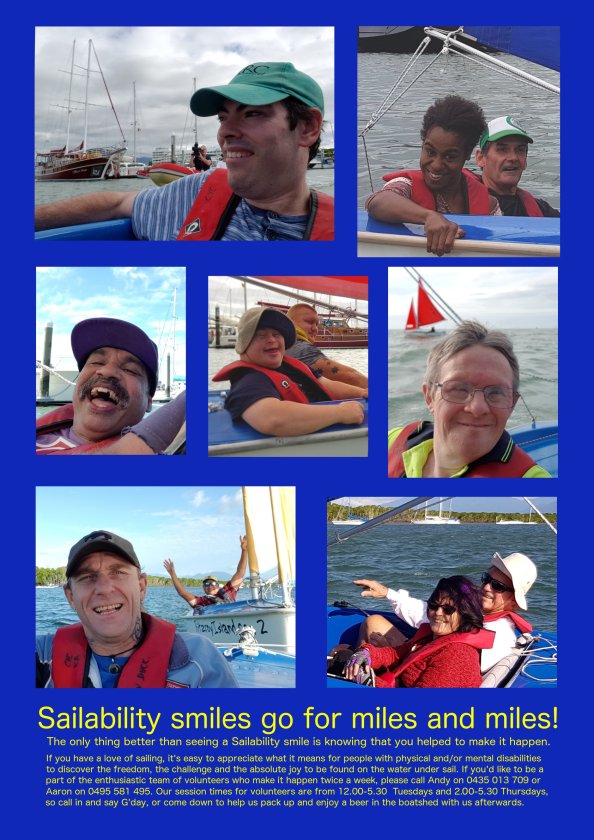 For those that have difficulty clicking this link RSA certificate by 4 pm today – CLICK here! Our Vice Commodore has offered to run a group session on link clicking. Watch the FB page for an announcement. The course is broken down into small, manageable sections designed to improve your learning. Perhaps participants will be invited to test their new knowledge at the Salt House. Don’t forget to bring your membership card so you can get the 10% discount.

Don’t forget,  boatcrewgear.com  0422953982. If you choose to buy something, include the code CAIRNSYC with the order for a 15% discount.