The month started with the Anniversary Regatta & Rob Leitner Memorial over two days. Hotly contested by six boats with some fabulous prizes and a sumptuous BBQ thanks, once again, to the Leitner family.

We saw Impulse, Wee Welsh Dragon, Anastasia, Fast Forward, Centinella and Out of the Blue heading for the start line. Unfortunately ‘Out of the Blue’ had to pull out when the top of the main pulled out of the mast track. This year ‘Wee Welsh Dragon’ took the podium, a great finish demonstrating that if you prepare your boat well and have a good crew you will do well. ‘Fast Forward’ as usual sailed well having been absent for quite some months and ‘Centinella’ took the third spot. Well done all for being there and making it another great day’s sailing.

Well done Kevin Spies Brian Dowling Bill Munro and many thanks to our fantastic start boat team on Catcha, course setting and all of the behind the scenes efforts Neil Robson Jamie Leitner & Bill and a special thanks to Sue & the Leitner family

We are so lucky in the CYC to have many generous volunteers. They came with Gernie’s, brushes, paint pots and spray guns and in the course of two weekends, a rather grubby sickly yellow clubhouse was transformed into a gleaming asset of several shades of grey. (As were the feet hands and clothes of the volunteers). Barry managed to secure the paint and point everyone in roughly the right direction, thanks Barry for taking this magic venue under your wing and getting it looking absolutely great for the coming season.

6 meter Polycraft with 140 4 stroke Suzuki. We made a good choice. It should prove to be tough and reliable if it’s looked after properly. It’s already been put to good use by Sailability.

Mal took the new club boat as a support craft to the Ellis beach for the weekend. It went extremely well. The committee are congratulated for their choice of craft. It will be great for all classes. Mal reckons it’s a cracker of boat.

The first event hosted by the revamped venue was the Ellis Beach regatta for ‘off the beach’ dinghies and catamarans on the 29th July. It was nice to see so many members enjoying what is the jewel of boating in Cairns and some that travelled all the way from Townsville dragging a trailer load of dinghies. I know some members are a little shy thinking that Ellis is just for the young. Not so, even keel boaties are welcome. You can sharpen your skills in a dinghy, or not. Just enjoying the comradeship, a few beers and cooking up a BBQ under the paperbark trees makes for a perfect day out.

Perfect weather for the small boats with light winds. The winner was ‘Wild Spirit’ (so far ahead we thought they’d gone home), ‘Morphun’ second and a newly polished ‘G&T’ third. Well done everyone, a great day with eight boats competing. Thanks once again to the Fitzroy Island Resort for sponsoring the race and donating some fabulous and well appreciated prizes.

See the feature article below from the G&T crew.

16 – 19 September will be here before we know it so get your nominations in now and make this another great event.

The car park gets another mention this month. Remember, you must have your car park sticker STUCK on to your car to enjoy the privilege of using our limited car park. Lying about on the dash is not good enough as is seems the dashes change from time to time. Remember it is a privilege to use the car park mostly for those good people that make significant contributions to the club. So, if the sticker is not stuck your privilege may come unstuck as well.

A hurried breifing included a downwind start, unusual in sailing circles, and with only 30 minutes to the start it meant a “Le Mans” style dash to the eight yachts resting in the marina.

G&T’s crew for the day, Henrich and Kim, two young German backpackers, somewhat lacking in experience but full of enthusiasm, gaily leaping across the lifelines narrowly avoiding a face plant on the fore hatch. After stowing their tent (camping was their only option for overnighting on Fitzroy Island) they then settled in to decorative positions on the deck not realising they had been “shanghaied” into a racing crew rather than a leisurely cruise on the Coral Sea. Their recruiter, Michelle, also of limited nautical experience, joined them as translator and confidant. This left only the skipper and a WAGS stalwart, Rene, with little spinnaker experience as the core to the racing team.

A downwind start and an outgoing tide means that one only has to be upwind of the start line then drift back to cross the line after the gun. We managed to hoist the main and large genoa just before being swept over the line. We were on out way owing more to accident than tactic, fortuitously with the leading boats. It was quickly apparent that the fleet was drifting together and a spinnaker needed to be launched to break out of the pack. Wild Spirit had clearly planned such a tactic and, with their well oiled & experienced crew, came sliding past, white spinnaker billowing. I handed the helm to Rene as it was clear the skipper was the only person on board with spinnaker currency. Help with muscle was required, Henrich clearly was the man for the job. What is German for “pull”? Can’t be too hard. Fortunately Kim had fluent English and set to translating simple instructions like red rope, blue rope, pull, ease off, etc. When it came to nautical terms like port, starboard, bow, stern, halyard & sheet Michelle had to first translate to Kim. More difficult concepts like tack and gybe had to be explained by Rene to Michelle to Kim to Henrich. Like Chinese whispers the actual instruction he heard, by the look of incredulity on this face, was quite different and bewildering.

Finally the spinnaker was up and drawing us away from the fleet that had become becalmed except for ‘Wild Spirit’, a thoroughbred racing machine now well ahead, crew dextrously dancing the deck extracting very last ounce of energy from the fickle wind. Then they stopped, spinnaker falling as limp as a wet towel. We charged on in our own personal breeze, the German crew now elated that we might slip ahead until our spinnaker too, fell limp. The well oiled crew by now had their spinnaker stowed & genoa up and, being windward, caught the returning breeze and sped away once more leaving us drifting with the tide. Meanwhile the rest of the fleet also seemed blessed with their own personal breeze, charging down on us. We all passed the first, and only, mark to starboard pretty well together, except of course, for the well oiled crew seen disappearing toward Cape Grafton.

The next two hours were spent trying to get the boat pointing as high as possible while keeping enough speed to stay ahead of the fleet, Rene’s helming skills improving as we all sat on the rail, the German crew proving their worth shielding us from spray thrown up by the increasing swell. Three hours and seventeen minutes later we crossed the finish line at Fitzroy Island not really knowing how well we had done because a wizard with a computer was applying his magic to the handicap figures.

Clearly the well oiled crew had done well as we had lost sight of them several hours earlier. 5:30 was the time of reckoning at Foxy’s Bar 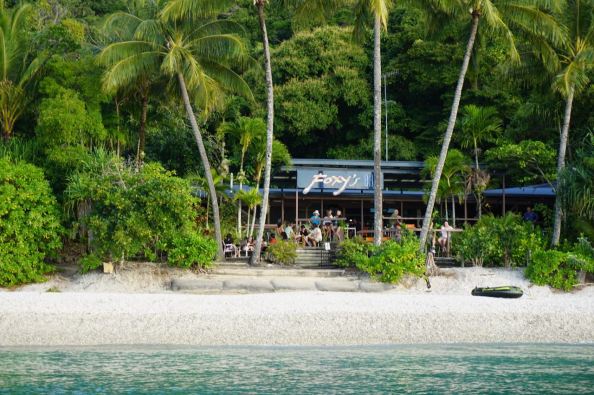 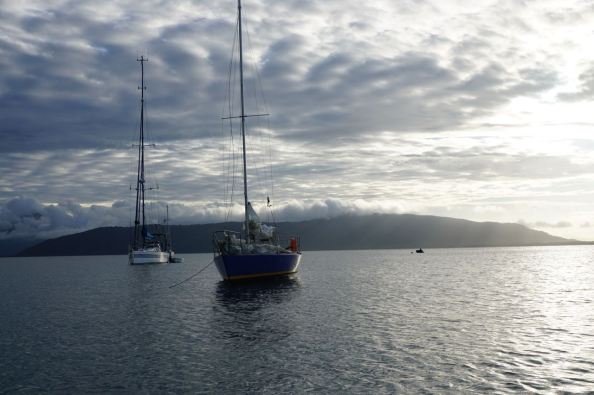 The announcement always starts with the slowest boat and we had come in ahead of the last boat, at least avoiding the wooden spoon. Seventh, sixth, fifth, fourth, this is getting exciting. Third, ‘G&T’, wow! ‘Morphun’ a similar sized boat was second, well done. They had out pointed and out sailed us. First, ‘Wild Spirit’ and the well oiled crew, a great job as they had the highest handicap by far.

Third prize was a generous $40 bar tab. I can’t drink that much and shouting the whole CYC table would mean fizzy water all round at best. Fortunately it’s possible to order food at the bar at ‘Foxy’s’ so the prize was soon swallowed. A hint of rain and our crew retired to their tents and I to a cozy night on G&T.

Cozy is not the feeling I had when I discovered that my sleeping kit hat suffered exposure to significant dampness. Thoughts of enduring discomfort were banished when I realised the spinnaker was bone dry and would make an excellent substitute, and it did as I drifted off. Was I dreaming? What was that noise? A helicopter in the night, “go away”. It buzzed in and out and eventually left. I drifted off again to the gentle swaying of the boat on the slight swell.

Morning was greeted with an invitation to breakfast on board ‘Anastasia’, a sumptuously equipped mother ship, before the beach rendezvous with my crew at 9am. I rowed ashore to be greeted by Rene with just two bags. “Are the rest of the crew coming soon?” “No” said Rene, “They are not here”. What? “Didn’t you hear the helicopter?” “Henrich was winched out on the rescue helicopter with snake bite and the others took the first ferry out to rescue him from hospital”. Now losing one crew is unfortunate but loosing all but one looks careless.

Henrich, had indeed, trodden on a snake which, naturally irritated, had bit him on the leg. Michelle swung into action with recently learned snake bite first aid skills while Rene Googled ‘poisonous snakes on Fitzroy Island’. There were none but, pythons have pretty infectious mouths and the wound should be cleaned. Arriving at reception the word “snake bite” was mentioned and the emergency button pressed before the qualifier “python” could be added. The rescue juggernaut was now in motion and any pleading that “it was only a python” or “it doesn’t really matter” could not recall the rescue team. Henrich was strapped to a stretcher and winched into the belly of the hovering helicopter and disappeared into the night from his loved one and interpreter. Hence the early departure on the first available ferry.

With a following wind the two of us departed the island for a leisurely sail home. Somewhat too leisurely we thought as the wind died. Why don’t we try the spinnaker? With just two of us? Never done this before but the wind was light. “Let’s give it a go”. And it flew, somewhat shy at first with the wind backing to the east as we rounded Cape Grafton then further to the north as we headed down the leads finally dropping it as we came up to the marina. Nearly three hours under spinnaker. Rene was now an expert at the art of flying the kite. We’ll give the well oiled crew a run for their money next time.

Henrich was rescued, and he did have travel insurance, so all ended well and he had a great story for his journal (unfortunately in German).

Thanks to the Fitzroy Resort for their generous support for this event. First prize was two nights accomodation for two with ferry transfers.  Not sure how the well oiled crew will fit into one room. Second and third prize was a generous bar tab so, thank you Fitzroy, we’ll be back.