Day One. Carnage. Fitzroy Island and back was race one of the Sail Cairns Regatta bringing early havoc to the fleet. A 25kt breeze tested every boat as they pounded around Cape Grafton. The big green catamaran, ‘Barefoot’ broke a daggerboard which gaily folded back to severely bent a rudder killing the regatta for them. This avoided the anticipated grudge match with ‘Leightning Storm’ and reduced division 4 to just two boats. In division one, ‘Spank’ got spanked and retired and ‘X2’ broke their spinnaker tack line. Vanguard decided to test a new spinnaker furling technique… around the mast. This had not been tried before, so Mr Moule had to go up the pole with a sharp knife and refashion a perfectly good spinnaker into several smaller ones. First over the line was ‘Yes’ in a credible 4 hrs 25 min for the round trip. Impulse was first on handicap with 4 hrs 30 minutes.

In Division 2, three J24’s lined up to do battle with ‘Kaizen 2’ taking out first place in the first race. On the second race, it was ‘Fast Forward’s’ turn, race three ‘Kaizen 2’ fourth race ‘Fast Forward’ took the honours. This set up the fifth and last race to be the decider. No wind and drizzly rain promised to ruin the day for everyone but by lunchtime, a wee zephyr wafted down the inlet and the race was on. ‘Kaizen 2’ took out the series and ‘Viva La Beaver’ has the honour for the longest distance sailed to get to the regatta, all the way from Port Douglas.

The strongish winds continued for the next two days. Day two was a race to Double Island and back. An unconventional downwind start had the lightweight boats, ‘X2’, now joined by ‘Out of the Blue’, flying ahead on their asymmetric spinnakers. A gybe around C9 sent them towards Double Island catching waves and having some exciting moments. Meanwhile, the big boats bided their time knowing that the increasing breeze would soon put the small fry in their place. Once round the island, the bigger, heavier and longer boats sliced through the chop clawing their way passed the lightweights who were pounding and diving all the way back through the swell. Impulse took out line honours and handicap this time. Some nice sailing by Frank & Wendy. 10 minutes behind was ‘X2’, a fantastic effort after five hours of sailing in choppy seas. Unfortunately, their handicap put them in third place behind ‘Volare’ which finished 30 minutes after Impulse.

Day three was two bay races, one sausage (windward-leeward) and one triangle (windward – wing – leeward) which kept crews on their feet with hoisting & dousing unruly spinnakers. ‘Out of the Blue’ kept up with’ X2′ for a short while until a couple of tack line failures put the boat on her beam ends and the crew scrambling to stay on board. X2 took handicap honours on both of these short races only one minute behind ‘Yes’ over the line in the first race and two seconds ahead in the second race.

The last day, race 5, an inlet race. Light winds and light boats meant ‘X2’ and ‘Out of the Blue’ captured every little puff. Out of the Blue popped out of the confused start ahead but blew the advantage with an incorrectly rigged spinnaker. The big boats wallowed in the light air leaving ‘Out of the Blue’ to win on handicap & ‘X2’ first over the line again.

Every morning a magnificent bacon & egg roll, together with the regulation shot of coffee, greeted sailors on their way to rig their boats. Of course, this and the yummy dinners, would not have appeared if it were not for our generous club members volunteering their time to make all this nourishment come together. This is what makes our Club such a nice place to hang out. Thank you all.

The regatta wrapped up with a hearty dinner and presentation at the Cairns Cruising Yacht Squadron.

A big thank you to TWW (Totally Work Wear) for their generous sponsorship. Remember also. Take your membership card along and get a discount on their range of practical clothing. Presenting your membership card helps them measure the effectiveness of their sponsorship so go along and buy-up some good gear and hopefully we’ll have them on board again next year. (The ‘Out of the Blue’ crew shirts came from TWW)

This year the number of competitors from the OTB and dinghy fleets were a little down on last year but those who did compete enjoyed the event and the racing was very tightly fought. The Dinghy sailors would like to thank the support team led by Daryl Beattie for their hard work over the regatta.

Peter Taylor (a new member of the club) raced well and secured first place in a laser, followed by Jai Miller and Miranda Wilson in 3rd.

It was also great to see Daniels new 29er out racing. I am sure that next year will be bigger and better.

Great start to the Summer Series of races for the keelboats. Four boats participating, ‘Vanguard’, ‘Volare’, ‘Out of the Blue’ & ‘Impulse’ in ideal conditions, 14kts SSE most of the way. Impulse was first over the line in 3 hrs 18 minutes with time for a leisurely lunch & a swim in the crystal clear waters before heading back. ‘Volare’, 2nd on handicap in 3hrs 40minutes and ‘Vanguard’, taking 4 hours and 15 minutes stayed the night to recover and was joined by Pete in ‘Summertime Blues’ who sailed over for the party. There was some confusion as to whether they were racing, especially when they were seen heading down the leads with an upsidedown spinnaker just before the start. ‘Impulse’ was so far ahead finishing first over the line and on handicap ahead of ‘Volare’ and ‘Out of the Blue’ third. Frank & Wendy got themselves two nights accommodation with breakfast at the Fitzroy Island Resort as first prize. It will be interesting to see if they take the free ferry over to the island or sail to enjoy their win?  Another huge thank you to the Fitzroy Island Resort for sponsoring our club by providing the generous prizes once again. 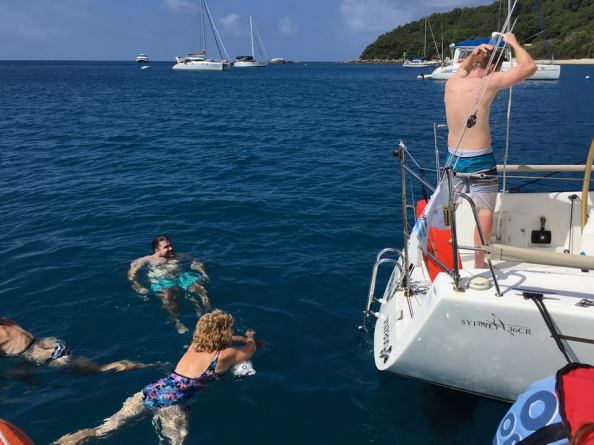 It’s hard being first over the line

Summer Series Race Two – Next Saturday. It’ll be a bay race. It’s not too late to nominate as there are five races and the final score is based on your best four races.

Started on the 7th and was well attended. Great to see lots of eager faces lining up to rig the Pacer’s under Scott’s guidance once again. Yes, I know you thought you were going to sail, so I understand your surprise at being tipped into the Marina on your first outing. That is the worst that will ever happen to you in a dinghy so it’s good to know you can get back in and keep sailing.

All the big boat skippers are looking forward to getting some of you as crew. However, dinghy sailing teaches you more about the physics in four weeks than you will learn on a big boat in a year. There is also the fun stuff like how to position yourself for a start and how to use the racing rules to your advantage, all in control of your own vessel. I know you are going to have fun.

This is the last series for our sailing season, join in & have fun.

Every Tuesday and Thursday – see below for some exciting developments

WAGS – Every Wednesday. A fun sailing day with others, stress-free and a chance for non-members to sail for the day, just $20 gets you on a boat. Be at the Boat Shed at 12.

Another lovely WAGS. Where else can you get an afternoon’s fun for $20?

The car park gets another mention this month. Remember, you must have your car park sticker STUCK on to your car and easily visible to enjoy the privilege of using our limited car park.  Name and shame, here are some offenders.

Ports North will book people without a sticker on their vehicle, you have been warned!

Watch out. These will be in trouble next time

Andy and his volunteers are having a ball, every Tuesday and Thursday. Here’s the latest from Andy…

Here’s a pic of Jaye, Jason and me on the mighty Weta welcoming Cliff Clarke, on ‘Livng The Dream’, as he sails into Cairns. The remarkable thing here is that Jaye, Jason and Ciff are all usually confined to wheelchairs.
It’s the first time that I’ve taken 2 people with disabilities out on the Weta and it went beautifully, with much excitement from Jaye and Jase.
Cliff has just completed an amazing voyage from Melbourne to bring our newest and biggest boat to join the Sailability Cairns fleet.
Right from the start, a huge part of Cliff’s dream has been to be able to take all of our Sailability crew sailing on this magnificent wheelchair accessible catamaran that he has bought and set up for him to be able to live on.
So we had a little test party last night as we had Don , Jaye and Jase bring their chairs on board. The look on Don’s face when he realised that he’s going to be part of next Wednesday’s WAGS crew, was priceless.

If you would like to come down and join the fun, volunteers are most welcome, just turn up at the Boat Shed, Tuesday’s and Thursdays around 2pm.

Sailability Cairns has GOTA GETA WETA or 2. This is the first time that I’ve taken 2 people with disabilities out on the Weta. Jase and Jaye loved it.